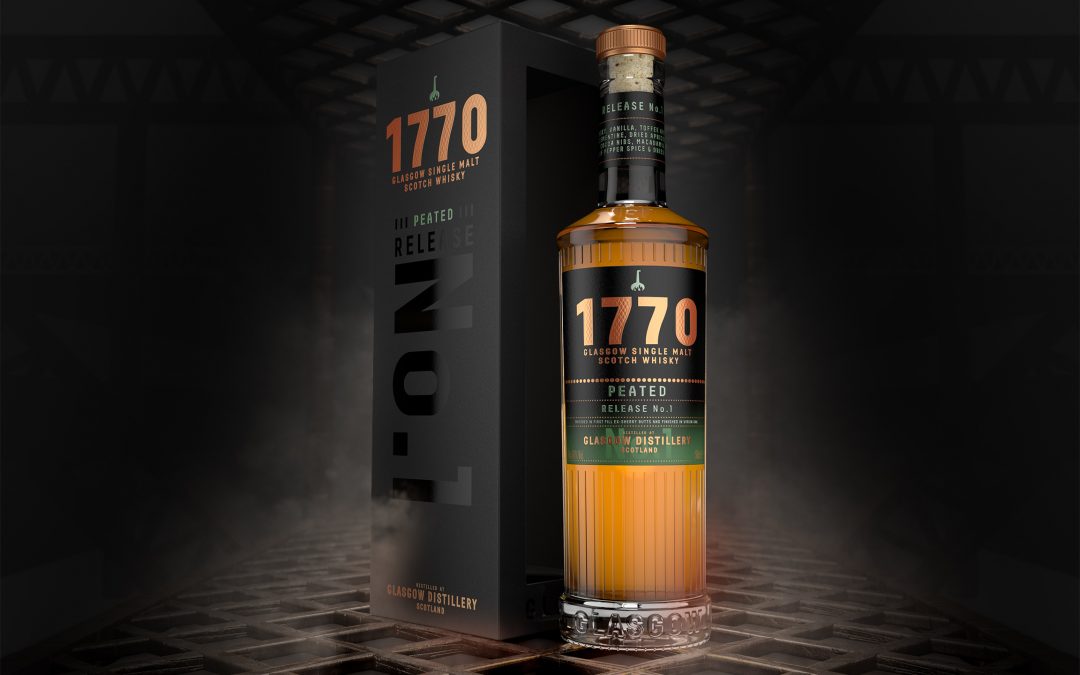 The Glasgow Distillery has today announced the launch of their highly anticipated 1770 Glasgow Single Malt Scotch Whisky, Peated Release No.1.

1770 Peated is a rich and smoky addition to the 1770 Single Malt family and the first of its kind from the city of Glasgow. The distillery’s inaugural smoky whisky will sit alongside the Original 1770 and will soon be joined by the arrival of the Triple Distilled release in early 2020. Together, these three expressions will collectively form the 1770 Signature Range.

Crafted by smoking the finest barley with aromatic heather-rich peat from the Scottish Highlands, 1770 Peated combines the exceptionally pure water of Loch Katrine and has been carefully hand-crafted in the distillery’s two unique copper pot stills, Tara and Mhairi.

Matured in first fill ex-sherry casks and finished in virgin oak, 1770 Peated is described as a sublime and sophisticated smoky single malt, with hints of flamed orange zest and rich caramel toffee leading to various dark earthy fruits. The finish is said to be long and smooth with lingering notes of macadamia and spice.

1770 Peated is now available to pre-order from the Glasgow Distillery website for £49, with shipping expected in late September. Those who pre-order will secure a luxury limited edition ‘Release No.1’ gift box with their purchase.

Liam Hughes, CEO and co-founder of The Glasgow Distillery, said:

“It’s very exciting to finally be bringing our peated 1770 out. Our peated run was originally a much smaller percentage of our overall production but when the first spirit came off the stills, the distillers told me I had to taste it.

“Within the hour, Mike (my fellow co-founder) and I ordered three times the quantity of peated malt we had originally planned. The quality of the spirit we were tasting was so good, we just knew we needed more.

“Glasgow is really important to us, not just because we are The Glasgow Distillery, but because Glasgow is now part of a new chapter in the world of single malt Scotch whisky, which is really exciting. Our 1770 Signature Range shines a light on modern distilling, and we’ve produced something we are very proud of.”

The announcement of 1770 Peated comes on the back of the Original 1770 winning four gold medals at four of the world’s most prestigious spirits competitions: The San Francisco World Spirits Competition, The International Spirits Challenge, The Scotch Whisky Masters and The International Whisky Competition. The distillery has also reached the final stages across four categories at the inaugural Scottish Whisky Awards, due to take place on the 5th of September.

Last week, The Glasgow Distillery also revealed the arrival of two new whisky stills which have been named in honour of two of the city’s great female artists, Margaret and Frances MacDonald. The addition of these new stills will boost the distillery’s production capabilities to approximately 440,000 litres per year – the equivalent of more than one million bottles of its 1770 whisky.

To secure a bottle of 1770 Peated with luxury ‘Release No.1’ luxury packaging, visit www.glasgowdistillery.com and pre-purchase your bottle.