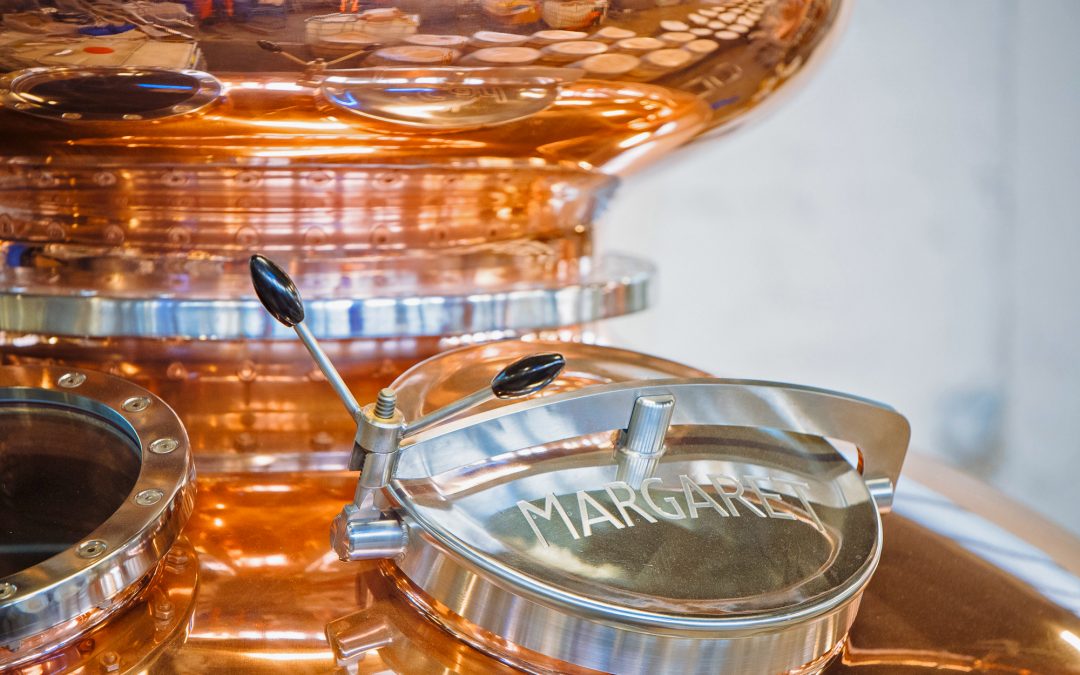 The Glasgow Distillery has announced the exciting arrival and naming of two new whisky stills which have recently been installed at their premises in Hillington.

After months of deliberation, the stills have been christened ‘Margaret’ and ‘Frances’ in honour of two of Glasgow’s most influential female artists.

The new stills, which are identical replicas of The Glasgow Distillery’s two existing whisky stills, Tara & Mhairi, double the distillery’s production capabilities to approximately 440,000 litres a year – the equivalent of over 1 million bottles of their single malt scotch whisky, 1770.

Who were Margaret and Frances MacDonald?

Towards the end of the 19th Century, Margaret MacDonald and her sister, Frances MacDonald, moved to Glasgow and enrolled at The Glasgow School of Art. Both became prominent members of ‘The Glasgow Girls’, a group of pioneering female artists who had an undeniable influence on forging the iconic ‘Glasgow Style’ of art which the city still celebrates to this day.

The MacDonald sisters worked from a rented studio in Glasgow and were highly regarded for their industrious and technical artworks, often using metal, glass, wood, and textiles to create their pieces. The sisters made art both their way of life and their livelihood, leading them to both commercial and intellectual success.

In the mid-1890’s the sisters had established a studio and soon began to collaborate with the highly esteemed Charles Rennie Mackintosh and James Herbert MacNair. The four artists quickly cemented their international reputations by regularly exhibiting across Europe to great acclaim, alongside fellow Art Nouveau artists such as Gustav Klimt. Together they became known as ‘The Glasgow Four’ and the leaders of the Glasgow Style.

Liam Hughes, CEO and Co-founder of The Glasgow Distillery, said:

“Margaret and Frances were so influential and prominent in their day, shaping the very city around us, and yet their legacy is not widely known.

“I’ve read the story over and over and I love that many contemporaries marvelled at the sisters’ metalwork—a heavy, dirty process that women usually avoided. They were mastering very manual – often dirty materials – at a time when women hadn’t even achieved the vote and were socially expected to have children and be homemakers.

“It seems incredibly fitting that we name our two new stills after sisters who specialised in hands-on, technical art practices such as metalwork and paved the way in traditionally male dominated practices.

“I couldn’t help but draw some parallels between these women and women who work in the whisky industry nowadays, particularly in production. In its own way, distilling is an art and is an art that is respected worldwide. But on a day to day basis in a distillery, it can be very hands-on and technical. It is also an industry that is traditionally male dominated.

“Thankfully times are changing in the drinks industry and I am so pleased to see more and more females applying for jobs in production at Glasgow Distillery.  At the moment, over half of our employees are female and under 30 years old. Thankfully, this is a trend which the spirits industry is starting to follow en-masse but we, and indeed the drinks industry, still have a long way to go!

“We are delighted to celebrate the sisters’ brilliance by naming our stills after them. We hope to honour their legacy and do our bit to promote their influence and impact upon a city which is nowadays renowned for it’s art and design movements.”

The introduction of two new whisky stills comes on the back of the successful launch of their debut single malt whisky brand ‘1770 Glasgow Single Malt Scotch Whisky’. The 2019 Release of 1770 Glasgow Single Malt Scotch Whisky is available to purchase from the Glasgow Distillery website for £49 with news of their Peated Release expected to be announced later this month.